Heads turn as he saunters into Cafe Poste in his leather jacket and Lennon style shades. His deep, husky American accent and eccentric dress sense screams rock star as opposed to photojournalist. A major success in the world of photography- at Visa he is our celebrity figure. During his interview at the Palais De Congres the room was silent as the God of our religion told us that photojournalism wasn’t dead, because he was still alive. The auditorium burst into great applause after every well articulated, eloquent and inspirational response. It was a privilege to hear this legend talk about his medium.

Stanley Greene’s work titled ‘Standing at the Graveyards of E-waste’ was exhibited in the grand Eglise des Dominicains in the city of Perpignan at Visa this year. After a personal and passionate introduction a sizeable edit of images followed, showing what happens to our unwanted smart phones and computers after they are discarded. Greene shows his audience the appalling conditions of e-waste recycling plants in Nigeria, India, Pakistan and China and couples these images with factual captions which inform us of the damage our throw away society causes in these forgotten places. 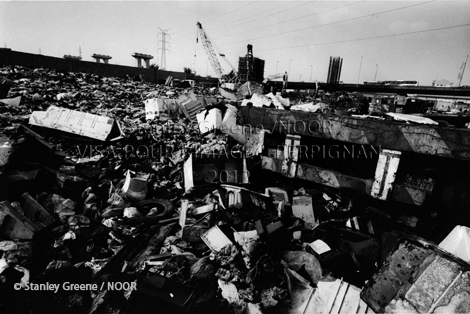 Shot on black and white film the grainy, high contrast, darkly printed frames mirrored the sinister narrative and the exhibition flowed freely and smoothly from one frame to the next. The consistency in style and composition spoke volumes of Greene’s position as a well established, confident practitioner of the medium, who has, over many working years developed a bold, individual and stable style and approach. His experience is also evident as his subjects continue to work, seemingly oblivious to the photographer at work beside them and therefore the audience is presented with a natural representation of daily life in these recycling plants.

Despite the beautiful quality of his work, its informative nature and personal epiphanic reasons behind starting the project I feel Greene missed a vital opportunity this year at Visa. With photographers constantly upgrading camera models, agencies striving to keep up to date with the most recent software and computing equipment and a staggering percentage of the general public owning smart phones and laptops its the perfect opportunity to make all of us aware that we could be doing something with our e-waste to make a change. 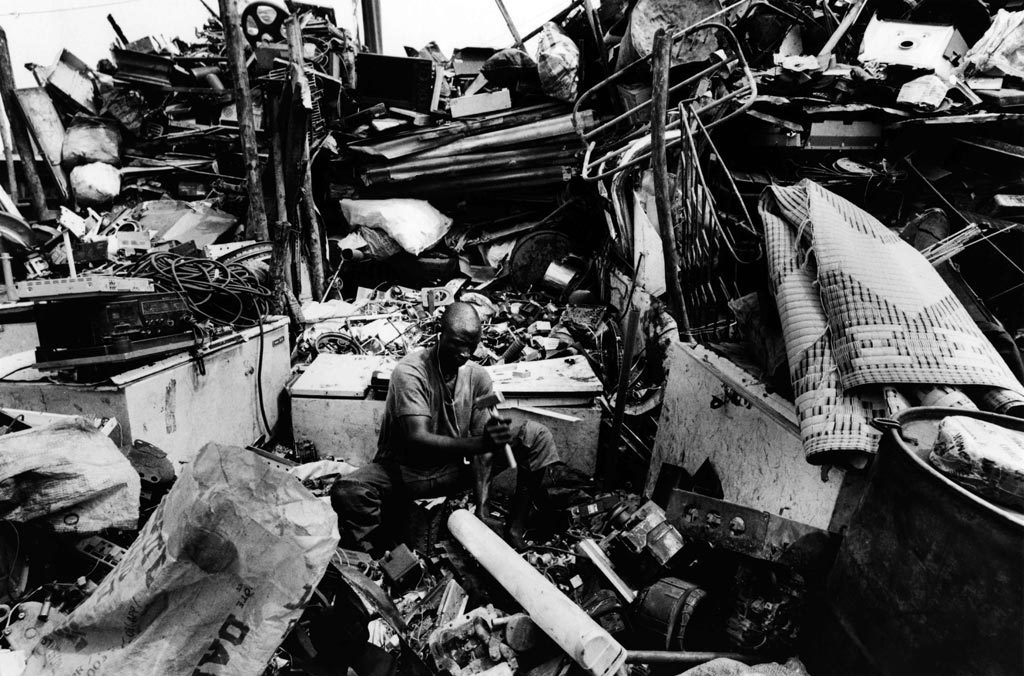 On the same day as viewing the exhibition I received two text messages urging me to donate my old mobile phone to a good cause- but nowhere in Greene’s work were these schemes or charities mentioned. After being presented with these shocking scenes, the horrifying consequences of our Western throw away culture and feeling guilty about all those once loved electrical items I thoughtlessly tossed aside for a bigger better model it is the ideal time to educate me as to what I can do to make a difference. During his interview Greene kept repeating ‘nobody cares’ – but after hearing even more horror stories during this conference I clearly recall picking up a text and feeling ashamed and almost embarrassed to use my phone openly amongst a crowd of people who had avidly listened to the same horror stories as I had only minutes ago. I cared, and wanted to know what I could do to help.

People are much less likely to go and research how to dispose of their electric equipment responsibly when they return home than if the information was right in front of them. My proposition would simply be a board, similar to that of the introduction board at the end of the exhibition suggesting how us photographers and public should dispose of our old equipment. Or a website, a card, an scannable barcode with a direct link to a specific charity or company where you’re able to get rid of your e-waste in an environmentally friendly and socially friendly manner. Perhaps Greene underestimates the power of his work and the guilt his audience felt after viewing the exhibition.

Guilt inside will not stop women and children working in these appalling conditions or help them get an education or lower the risk of miscarriage due to the toxins in the air. Awareness is important of course, but its action as a result of this awareness that is truly important. On reflection I enjoyed viewing Greene’s work, it pricked my conscience and will inevitably enter my mind when I next upgrade- but unfortunately a nudge in the right direction was missing and could have made all the difference.