During an evening screening at Visa Pour L’Image we were shown a series of images by Ed Kashi- images he had rejected during his career along with a voice over explaining why these frames were deemed unusable. Below is my response to this work: 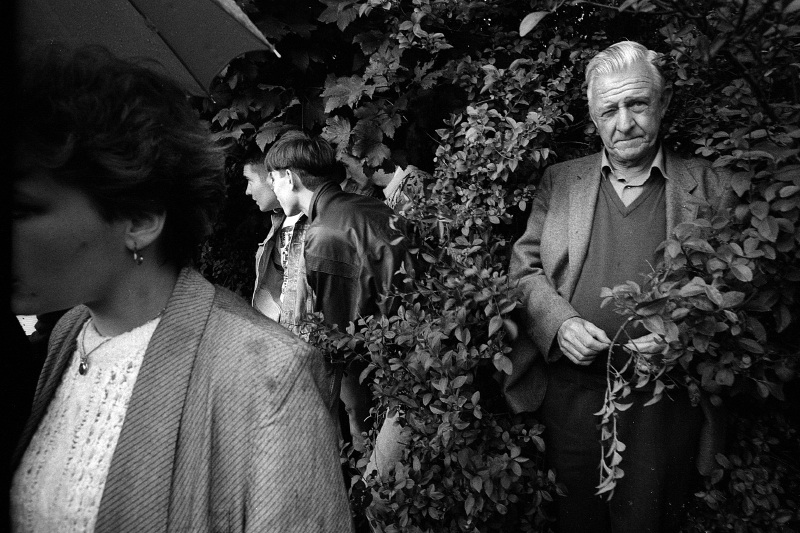 Photojournalist Ed Kashi has worked for over 30 years in his field and decided to take a look back on his rejected images and create an exhibit and catalogue of these unwanted moments. Frames deemed unsuccessful because of one factor Kashi feels is vitally important in capturing the perfect image- eye contact. Kashi concludes that if the photographed has caught eye contact with the photographer the portrait is unsuccessful, as though this consciousness and awareness of the photographer’s presence takes away from the image’s sincerity as a natural, honest documentation.

In my mind, this is a huge sweeping statement to make. I’m sure whilst reading this great portraits that include the subject’s eye contact are coming to mind. Cartier-Bresson’s Alicante, Paul Strand’s Tailor’s Apprentice, Arnold Newman’s Igor Stravinsky- the list goes on.

Eye contact is a fundamental part of a personal introduction and often the same is applicable for the photographic introduction. Staring into the eyes of the famished child, the prisoner of war or victim of rape can make all the difference in connecting with a far away person who an audience may otherwise be entirely disconnected. Holding that painful gaze or helpless stare makes you stop and think. Often it can paralyse a viewer, unable to look away and drawn further into an image bringing to life the experience of meeting the photographed.

Of course, eye contact between photographer and photographed doesn’t always make the best frame. At times the lack of eye contact can make an image; for example Dorothy Lange’s Migrant Mother. The lack of eye contact and thus connection between viewer and subject here mirrors the isolation and disconnection felt by Lange’s Migrant Mother. It emphasises the abandonment and solitude of the subject and the frame is stronger for it. Or another example where eye contact would have taken away from the image is W Eugene Smith’s Tomoko Uemura in Her Bath. The lack of contact between subject and audience here emphasises the intimacy of the moment and the close relationship between mother and child, it also draws attention to the absolute devotion from mother and dependance from child. Eye contact in a frame such as this would detract from all of the above.

The photographer attempts to capture natural behaviour and become invisible to his subjects. He believes that if a person is aware they are being shot they behave differently; pose, smile, straighten themselves out, try to look respectable and approachable. This may be true but it is the level of which the awareness has struck which I feel is more important than if it smily has or hasn’t. With a glance towards the lens when the shutter is released the subject has no opportunity to chose a pose and smile for the camera- so the frame remains natural. I would also argue that a photographer who has spend a lengthy time with their subject and has built up a strong trustworthy relationship will be able to capture frames which include eye contact but are still very much natural and honest.

The success of eye contact within a frame should be considered. There is no set formula in which to follow. Whether am image should include eye contact or not depends on numerous factors- The narrative, the structure of that narrative, the message of the image and so many more. So, in response to this work I felt that there were some beautiful images but when put together these originally unwanted frames held no coherent message or narrative and I couldn’t help but feel they would have been much stronger sitting in their own body of work rather than this graveyard of discarded moments.

For more information on Ed Kashi, this project and others go to- http://www.viistories.com/photographers/ed-kashi.aspx