I have recently began reading and writing alot more around photography in a hope to widen my knowledge and understand of the medium. Writing about issues I feel are important or ignored within photography has been a way of allowing myself to fall (further) in love with the medium and more often than not a way to really express my anger in regards to some issues. I plan on publishing my short writings, or rants, on this blog and welcome any debate or discussion that may follow. 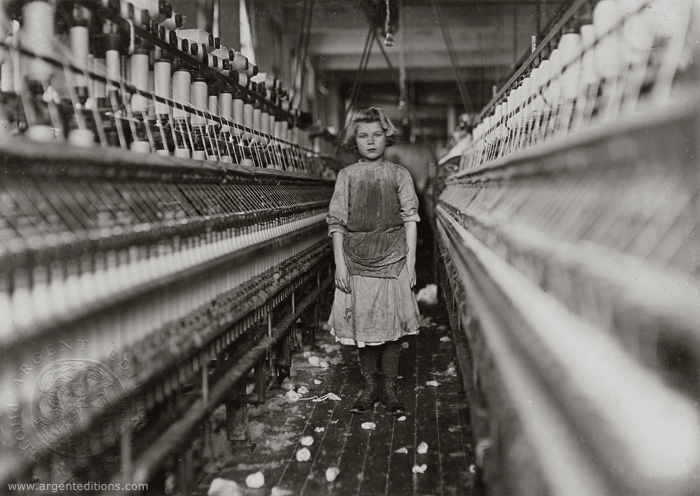 Lewis Hine’s work to me is an example of what photography should be and what it is unfortunately continually and rapidly moving away from. It was a vessel for change, a tool, a movement- a revolution. The work of Lewis Hine succeeded in changing the laws of child labour. His images evoked that change, they seeped into the hearts and minds of those who had the power the create that change.

These days, all we hear from young photographers is how they want embark on a career in photography and photojournalism to ‘make a change’. I know this because apart from having built up a relationship with the medium throughout my childhood, with my Dad a professional photographer, this is why I wanted to do photography. For this all-important but seemingly hugely ambiguous -‘change’.

So what does it actually mean? The correct definition for change is ‘to make or become different’. So applying that to the medium of photography is would mean to make a difference using imagery. The truth of the matter though is that photography no longer creates change, not the type of change that Lewis Hine managed to create with his striking and powerful frames of child labour. Is it because we’re presented with so much shit these days? Is it the volume of images depicting death and suffering that is making us ‘desensitized’, as we like to call it? Or is it because we as photographers have lost sight of why it is we are photographing?

Last summer I visited the Perpignan Visa Pour L’Image festival of photojournalism in the south of France. The work on display was phenomenal. Images of the Japan earthquake, of the Arab Spring, of Bangladeshi floods and so much more. The frames before me showed rejoicing, suffering, terror, happiness, relief, peace, war, anger, resentment and almost any other imaginable emotion. I was inspired and completely absorbed by what I saw, yet the whole time there was something niggling me. Something that made me feel uneasy, uncomfortable maybe. That same feeling occurred whilst visiting Guy Martin’s exhibition in Falmouth this year.

In Perpignan I viewed one exhibit after the other, often all of them negative or distressing with subjects such as gun crime in LA suburbs by Barbara Davidson or Chinese Mental Health Institutes by Lu Nan. After witnessing the injustice, pain, death and suffering of others I’d pop outside to sit in the ready made veranda that awaited my tired legs. I’d top up my factor thirty sun cream and grab an ice cold Heineken from the well dressed woman behind the make shift bar, set up solely for the exhibition viewers. I’d take a seat, scan over my notes and engage in an in depth conversation with my peers or strangers about what I had just seen, people interested in or involved in photography. We’d discuss frames we like – ‘that one with that guy dead on the road?’ – ‘yeah, that one’, and if the discussion became deeper we’d grab another beer or organize to meet over a bottle of red in Café Post later that evening. Then onto the next exhibition.

The images affected me, one exhibition in Perpignan had a huge affect on me, more so than any other body of work ever has. The work of Lu Nan and his documentation of the mentally ill in China really got me. Almost forced to leave the room to compose myself and close to tears by the final frame my experience of viewing those image will stay with my throughout my photographic career. It touched me so much, that all I could do what sit outside on a wobbly garish plastic white chair and slowly sip my cold beer. Heart wrenching isn’t it?

I’m sure different exhibitions had the same effect on many people during that week. Of course I was not the only one touched, but my point is that so many of those people were to do with the industry that nothing will change. We see the images and our human instinct tells us its wrong, horrific and must stop and the photographer inside us tells us we must find something equally as horrific and make someone feel the same as we did when we viewed those images. If it is only photographer and people involved in the industry really looking at the images and doing something about it then what’s the point? I don’t need a Magnum photographer to tell me my image is well composed or nicely seen and powerfully shot, although I’d be fucking thrilled if they did. What I need is Joe public to tell me that my image made him get up off his wobbly chair, forget his thirst for overpriced lager and go out and help make change. To tell his mates to donate to a cause, to volunteer somewhere or to continue raising awareness about the issue I photographed. That is what photography is about; not this self-congratulatory bullshit that the inner circle of photographers in the industry seem to relish.

What got to me in Guy Martin’s exhibition and in fact any other photojournalism exhibition with a similar content was the atmosphere and situation. ‘Stunning image’ I heard someone comment about one frame and then ‘I love that frame’, I heard myself say about an image showing a group of men standing above a mass grave of unidentifiable bodies. What am I saying? Photographically it is a powerful and well composed frame, but if that’s my only response to it, what the hells the point? People swarmed around the framed images, stark against the white exhibition walls. Expensive beer (it’s got to be expensive) in one hand and a ridiculously tiny salmon canapé in the other everyone had a good night. Looking at images of death and destruction, of bodies and irreversible change we all had a lovely sophisticated evening. Isn’t there something a little bit fucked up about that? That’s not what photojournalism should be about. Isn’t it supposed to be about honesty, about reality- however brutal? Maybe I’m being old school and not moving with the times, but for me, that’s what photojournalism is all about and if I ever have the opportunity to take hard hitting images of war and peace I vow to remember why I took them, who should see them and how.